Canada has unparalleled ocean resources and protecting our waters is critical to the lives and livelihoods of all Canadians.

Coasts and oceans are facing challenges from climate change, which is influencing rising sea levels, increasing water temperatures, and loss of marine habitat. Marine shipping, human use and development of our oceans are increasing, which poses environmental risks such as the potential for oil spills, underwater noise and invasive species. Furthermore, we need to continue to take action to ensure that Canadians benefit from healthy, resilient, sustainably managed and productive fisheries and ecosystems over the long term.

The introduction and spread of invasive alien species results in loss of biodiversity, leading to major economic costs. Climate change can make these impacts worse—for example, as colder waters in the Arctic and sub-Arctic become warmer, they become more receptive to potentially invasive alien species from more temperate areas.

Located in Nunavut, Tallurutiup Imanga is a large natural and cultural seascape that is one of the most significant ecological areas in the world. It provides important habitat for species such as the polar bear, bowhead whale, narwhal and beluga whale. For Inuit living in the region, it is a place rich in culture and wildlife.

In October 2018, the Government of Canada and the Qikitani Inuit Association reached an Agreement in Principle outlining key elements of the future Inuit Impact and Benefit Agreement for Tallurutiup Imanga National Marine Conservation Area. Once established, Tallurutiup Imanga will be the largest protected area ever established in Canada at 109 000 square kilometres—about 1.9% of Canada's total marine area.

Marine spatial planning is a process that brings together relevant authorities to better coordinate the use and management of marine spaces to achieve ecological, economic and social objectives. This process provides a collaborative venue to develop a marine spatial plan that helps guide where marine activities are best located and identify areas which need to be avoided or require special measures for conservation or protection.

Globally, it is estimated that about 8 million tonnes of plastic pollution enter the oceans every year from land and ships. Canada is playing a leading role in global action to address this urgent problem. Canada spearheaded the development of the Ocean Plastics Charter, which was first adopted in June 2018 by the leaders of Canada, France, Germany Italy, the United Kingdom and the European Union. Canada is also:

Protecting coastal and marine areas supports the 2030 Agenda and its global Sustainable Development Goals—in particular SDG 6, Clean Water and Sanitation; SDG 12, Responsible Consumption and Production; SDG 14, Life Below Water; and SDG 17, Partnerships for the Goals. It also supports specific SDG targets, as well as other international agreements and initiatives.

Work under this goal supports progress toward the 2020 Biodiversity Goals and Targets for Canada and the global conservation objectives of the United Nations Convention on Biological Diversity—in particular, by supporting our commitments to conserve 10% of our coastal and marine area by 2020 and to manage fisheries sustainably.

Conserving coastal and marine areas relates to other areas covered by the FSDS, including climate change, lakes and rivers, biodiversity and sustainable food. For example:

Indigenous peoples, provinces, territories and stakeholders play an important role in coastal and ocean management. They work with us to manage fisheries sustainably; to establish, manage and monitor marine protected areas and develop marine protected area networks; to prevent and address marine pollution; and to carry out integrated oceans management and planning.

Reconciliation is central to Canada's approach to conserving coasts and oceans. Indigenous peoples work with us to establish and manage marine protected areas and national marine conservation areas. The Anguniaqvia niqiqyuam Marine Protected Area, located in the Inuvialuit Settlement Region in the Western Arctic and designated in 2016, was the first marine protected area with conservation objectives based solely on Indigenous Knowledge.

Industry has an important role in addressing marine pollution. Under our “polluter pays” approach, the ship owner is liable for the costs associated with responding to a spill they cause thereby encouraging them to implement measures to reduce the likelihood of a spill.

Canada is also working with countries around the world to protect oceans and address plastic pollution. For example, in November 2018 Canada co-hosted the first-ever global conference on the sustainable “blue economy” in Nairobi, Kenya. With participants from over 150 countries, the conference focused on creating economic growth that is inclusive and sustainable, ensuring healthy and productive waters, and building safe and resilient communities. Furthermore, in October 2018, Canada joined 57 countries in the first-ever Operation 30 Days at Sea to combat illegal marine pollution activity such as illegal discharges of oil and disposal of waste at sea.

The Vancouver Fraser Port Authority is playing a regional leadership role through its Enhancing Cetacean Habitat and Observation (ECHO) Program, bringing together governments, industry, Indigenous representatives, scientists, and environmental and conservation organizations to coordinate and implement voluntary measures to reduce the cumulative effects of marine traffic on whales, including the endangered Southern Resident Killer Whale. The ECHO program has led in the development and implementation of voluntary vessel slow-downs resulting in a better understanding of how vessel speed affects underwater noise. The collaborative format of the ECHO Program's advisory working groups and technical committees serves as a place for open and frank discussion and consideration of potential mitigation solutions to reduce threats to whales from commercial vessel traffic.

Over 10 years ago, HP partnered with Montreal's Lavergne Group to develop an innovative closed loop process to make new HP cartridges from recycled cartridges, plastic bottles and clothing hangers. This process has used over 99 000 tonnes of recycled plastic and was used in more than 3.8 billion HP ink and toner cartridges through 2017. This has kept 784 million HP cartridges, an estimated 86 million apparel hangers and 4 billion postconsumer plastic bottles out of landfills. More recently, the partners have worked together to create printers made from recycled printers and other electronics.

The new targets reflect priorities of the organizations' members, who represent the broad plastics value chain in Canada.

Many of Canada's UNESCO designated biosphere reserves include coastal and marine areas and facilitate multi-partner initiatives to conserve the health of these waters. From grassroots stewardship projects to collaborations with Indigenous peoples, universities, youth and governments, biosphere reserves create opportunities for organizations to work together to protect aquatic species at risk and increase the protection of marine and coastal areas. 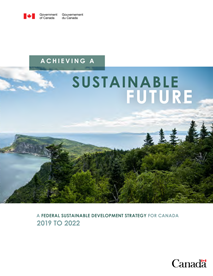